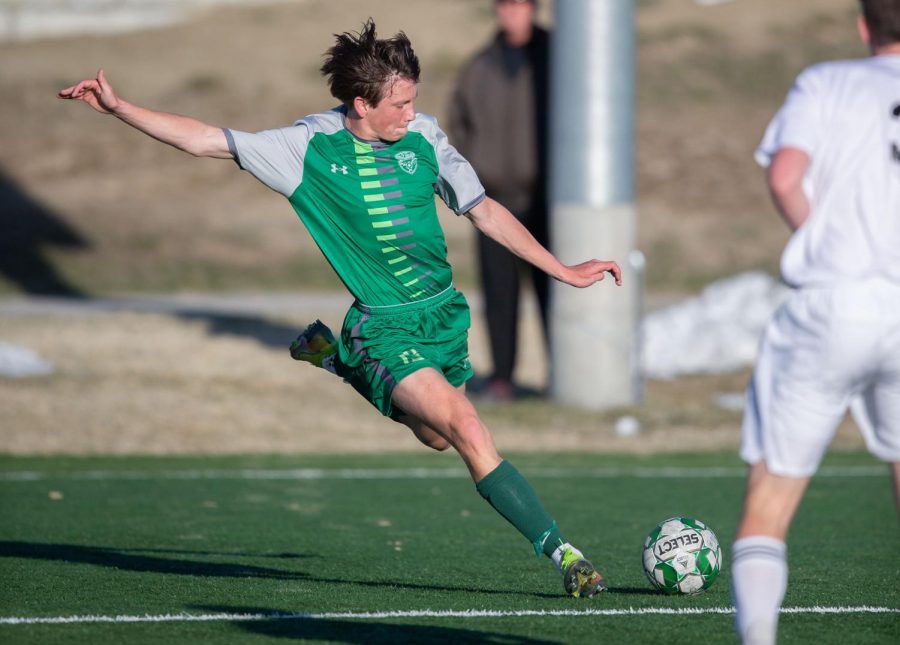 This past weekend the Trojan boys soccer team took home some hardware. In a fierce match up with the Jackson Broncs, our boys took the victory in a PK shootout. The Kelly Walsh team secured their number 1 seeding at state, and earned the title of 4a West Regional Champions.

“It was crazy. When my teammates stepped up to shoot my heart was pounding cause I was nervous for them. When it’s my turn to try and stop the other team though, I love it. I feel calm because all the pressure is on the shooters. Luckily my teammates were able to put some away and I was able to get some stops and we came out on top. It was a great job by the team and then celebrating after was unreal with the boys,” said Allair.

It was a climactic end to a season-long rivalry. In their first match up, the Broncs defeated the Trojans in overtime. The final score was 3-2. A quick let down in the second half of overtime, allowed the Broncs to come ahead. In the following game, on Jackson’s home turf, the Trojans showed their dominance with a 1-0 victory.

“It was tied and we had to dig in super deep to find a goal. We did after a lot of tries and it was one of the best games of my life,” said starting right wing Jackson Catchpole.

The Trojans head to state this weekend. On Thursday, they face Cheyenne East, the number 4 ranked team in the East conference. This puts the Trojan’s in an ideal position headed into the state tournament. Comparing statistics, Kelly Walsh should easily overpower the Thunderbirds.

“I’m nervous for either the Jackson or Thunder Basin game. Our biggest challenge will be playing one of those teams,” said senior Sian Realing.

Though seeded second in the East conference, Thunder Basin seems to be the team to beat. Going into regionals, the Bolts were undefeated with a 12-0 record. Another competitor at the tournament will be Sheridan, the East regional champions.

Trojan defenseman Hayden Umbach believes that in these high pressure games, “the focus needs to be on controlling the ball in the opponent’s half.”

The Trojans have a great chance of taking home a state championship title for the first time since 2012. Sian Realing and Colten Atkinson, both in contention for 2021 Gatorade Player of the Year, will hopefully lead their Kelly Walsh team to 1st place finish at this year’s state tournament.