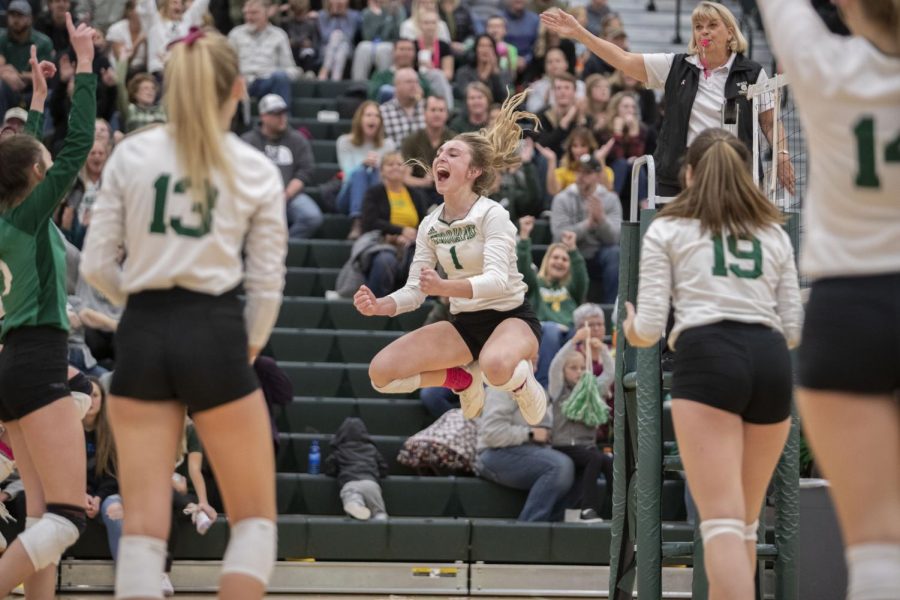 There is no question that Peyton Carruth has had a major impact on the Trojan Volleyball team. As only a freshman, she starts for the varsity team and brings a certain energy to the team that has made for a very successful season.

Some may think that playing varsity her freshman year with almost all seniors would be intimidating, but because of her older sister Corin, Peyton has practically grown up with the team.

“It helps that she has grown up around this group of girls being Corin’s younger sister. That has allowed her to feel like it’s okay for her to speak her mind and not feel like she’s the youngest person on the team,” said head coach Jeff Barkell.

Carruth knew she truly fit in with this team for the first time at Ogallala, a week long volleyball camp in Nebraska. For this one week she grew closer with the other girls on the team and finally became comfortable with them. “Being the only freshman, going into this summer and starting the camps I thought it might be a struggle and I didn’t know how it would go,” said Carruth, “But when we went to Ogallala, Nebraska the first couple days we were just getting used to each other, and by Wednesday we were comfortable with each other.”

Since this summer, the team found Carruth to be a huge asset to the team, and Corin has enjoyed being on the same court as her sister for at least a season. Corin said “I love playing with her and I feel like we sort of just bounce off of each others different personalities when we play.”

As for Peyton, it came as a pleasant surprise that they got along with one another on the court and said “Playing with my sister, it’s actually amazing. I never thought I would get along with her on the court but we suck it up for 25 points and 3 sets. We don’t take the arguments out onto the court that we have at home.”

Carruth has a promising future ahead of her considering she has already accomplished so much during her freshman year. Her family, friends, and coaches are eager to watch her grow in the upcoming years. And as for the quickly approaching state tournament, both Carruth and the team are hoping for a three-peat.