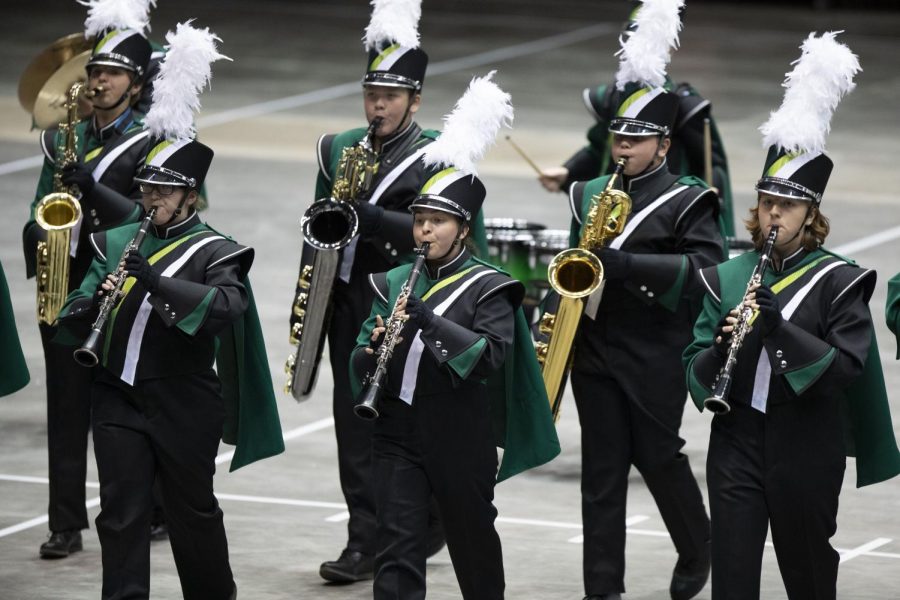 When the Kelly Walsh Marching Band took the floor for the final performance of the 2019 Wyoming State Marching Festival, the words “Strength and Honor” boomed over the loudspeaker before a packed Casper Event Center crowd. Their show featured music from the movie, The Gladiator, and the title words were those of a general preparing his troops for battle.

Fittingly, the Trojans drew inspiration for their performance from the words of Head Band Director Brent Rose. “Mr. Rose has a way to motivate everyone in the band by saying ‘It’s not a competition. But we are going to win,” explained head drum major Kayleigh Reinsbach. “I think that mindsight is what we strive to achieve and motivates everything we do.”

This Trojan mindset paid off, and the KW band marched away with an impressive number of awards. They received an overall “Superior” rating, the highest rating a band can achieve. They also netted “caption” awards in five of six possible categories — woodwinds, brass, color guard, marching, and outstanding music.

“Receiving a caption award in a given area means that we received ninety percent of the total possible points in that area. Very few schools can achieve that level of excellence,” explained Rose. “Getting even one shows a very high level of aptitude. Receiving five really puts us at an elite level compared to the rest of the state.”

The state festival was the culmination of months of hard work. Band members received their music last spring and started learning the show at a 5-day marching band camp at the University of Wyoming in August. Between classes, evening practices, and separate practices for drumline, band, and flags, the group dedicated 14 hours a week perfecting their performance.

Color Guard director Christi Bekke had nothing but praise for her team who scored 97 out of a possible 100 points in their category. “The girls did better than I could have ever expected. I told them to leave it all on the court and that’s exactly what they did.” Bekke said.

Rose was similarly thrilled to see it all come together at the end. Although there may not be an official “state champion” band, Rose clearly believed the Trojans were worthy of hoisting a banner. “I thought the band had their finest performance this weekend. In my eyes, they vastly outperformed all the other bands, I think the scores reflect that as well.”