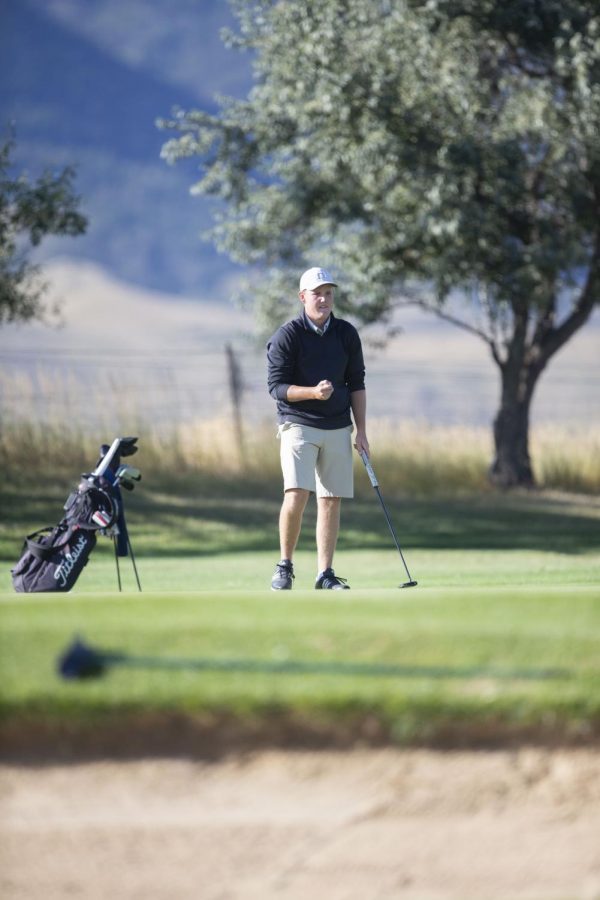 Nothing to prove and everything to lose. That was the motto for the Trojan men’s golf team throughout their fall season. The men’s team hadn’t lost a tournament that fall heading into the 2020 state golf tournament. The closest a team had come to beating them was 26 strokes in their first tournament of the season. The team was coming off of a two-peat and were trying to add to their collection and seemed like they were going to do so.

The first round at the state tournament couldn’t have been any more perfect for a Cinderella story. The Kelly Walsh men’s team barely squeaked by day one with an eight-stroke lead over Natrona County their cross-town rivals. This came as a huge shock to the team and coaches. “I couldn’t believe it. The course was tough and the conditions made it more tough. The course was exposing every aspect of your game that wasn’t working that day” said Brandon Shafer the Trojan’s first-year coach.

On day one, Kelly Walsh’s Two-Man senior Russel Sprecher shot his worst round of the year. His 80 combined with Kelly Walsh’s Four-Man senior Dane Rasmussen’s 85 brought the team total down immensely and gave the field of other golfers a bit of confidence. If it wasn’t for senior Taj Sutherland and Austin Neuman, the team total would’ve looked a lot different. Neuman and Sutherland were tied for the lead after day one with a one-under 71. This state tournament was Neumans first state that he was going to compete in. Neuman had been to state the three years prior but as an alternate.

“I always joke around about being a 3-Time alternate with the team. We always found it pretty funny and it became a pretty famous thing between all of us” said Neuman. He not only had never competed at state, but he had also only shot under in a round once in high school. His performance on day one was a shock to the field, except for one person “I have never seen anyone more ready for anything in my life. He was ready to turn that tournament into something special and that round showed it” said Mike Neuman who is Austin’s dad and was a Kelly Walsh volunteer coach.

On the other hand, Taj Sutherland had been to all of the team’s State Championships and was a contributing member in every tournament. Sutherland had won numerous varsity tournaments in his high school career, including two that very fall. Sutherland won the week before state at the Casper invite in a playoff against his teammate Russel Sprecher. The closest competitor to Sutherland and Sprecher had been 13 strokes behind. Sutherland was arguably the most dominant golfer that fall and he proved it to be true.

Day one was very different than day two. Day one was 65 degrees and only ten miles an hour of wind, but day 2 had something else in mind. The wind was blowing forty plus miles an hour and was a measly 40 degrees but it felt even colder. Kelly Walsh was clinging on to a small lead and it looked as if the bad conditions could mean a day two collapse. Senior Jack Coleman tee’d off first the second day for the Trojans. One after another the Trojans were teeing off trying to distance themselves from the field. Sutherland was in the second to last group and Neuman was in the last because they were in the lead. Having more than half the team ahead of them helped Sutherland and Neuman know how the team was playing while also competing for the individual title.

Throughout the round, word got out that Kelly Walsh’s lead was growing and after four or so hours it was almost guaranteed that Kelly Walsh was going to win. The 3-Peat was about to be completed and it was going to be the first in school history. The only question people had was who was going to win the 4-A State Championship individually. Sutherland put together a performance that would be talked about for a while. Sutherland shot a three-over 75. His second round was four shots better than any golfer that day, proving why he deserved to win. Proving that every second of every practice had paid off and he was going to accomplish something a player from Casper hadn’t done in 13 years.

As for Neuman’s round, he shot an eleven over 83 and secured third place. Neuman went from an alternate to an All-State golfer in a matter of a year. The improvement in his play that season was very impressive and the state tournament just showed it.

As for the team, they finished with three All-State golfers and won the team award by 27 strokes. It was a great showing of what Trojans are made of and showed a lot about every player that weekend.