Editorial: All Talk No Action 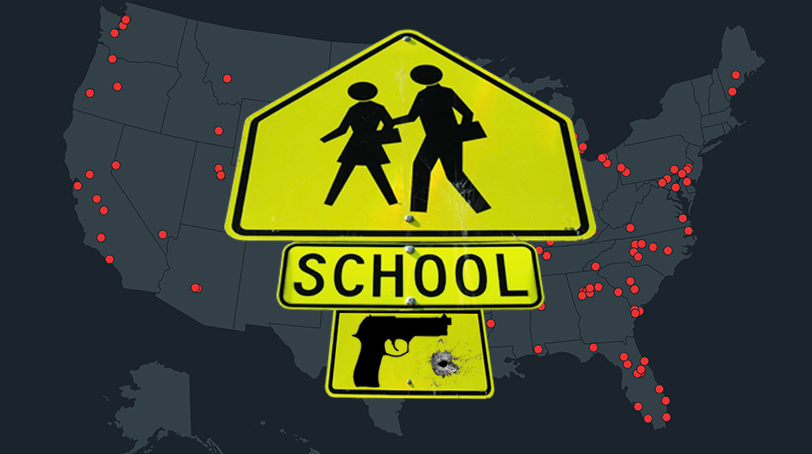 *Advisor’s Note:  This editorial reflects the view of the author and does not necessarily represent every staff member’s view on Gun Legislation.  We value the rights provided by the First Amendment, specifically free speech and free press, and ask that you keep that in mind as you read.

As we look back on the seventh school shooting of the New Year, reality must hit us. The massacre that occurred at Marjory Stoneman Douglas High School is the worst of the year, taking the lives of 17 innocent students, teachers, and coaches. It is third largest school shooting in America, only to Virginia Tech and Sandy Hook.

After every mass shooting there is a clash between those who argue the need for common-sense gun legislation and those who condemn politicizing innocent deaths. In the case of the Parkland shooting, the victims’ families and survivors of the attack alike started to speak out in favor of gun legislation, just a few short hours after the shooting took place. Even the Republican governor of Florida has already said that the state will look at all solutions to prevent tragedies like this from ever happening again in their state, even gun control, a normally liberal value. This trend is not just seen in Florida, but throughout the whole United States. In recent years, Gallup polls have shown that now 46% of Americans believe there is a need for stricter gun laws compared to only 39% that are satisfied with the current gun laws. The question that so many continue to ask is ‘how many lives must be taken by mass shootings before Congress takes action?’ Following the mass shooting that killed 59 in Las Vegas, Congress promised to regulate, or even ban, bump stocks. Even the National Rifle Association, which has recently put up to $400 million into American elections, threw their support behind the idea of further regulating bump stocks. To this day, not a single piece of legislation that deals with bump stocks has been passed in Congress. In 2016, the Senate failed to pass a bill that would bar people on the No-Fly list from buying a gun, although there is bipartisan support amongst Americans. Our legislative branch in government is all talk and no action.

America is known around the world for its love for guns and freedoms under the Second Amendment. After all, our flag and the symbol of an eagle represent freedom. The United States has the most guns per 100 citizens, at about 89 guns. This is far ahead of Yemen which is second to the United States, where there are approximately 55 firearms per 100 people. This number not only leads to high homicide rates in America, but it also can be attributed to its high suicide rate. America owns 48% of the nearly 650 millions firearms worldwide according to a 2012 survey by the Congressional Research Service. The next country on that list, India, owns only 11% of what Americans do. These numbers translate to high gun-related deaths in the United States. Compared to other high-income countries worldwide, the United States holds a strong lead in gun-related deaths. It stands with 102 deaths per 1 million people. Again, there is a large gap in the country in second place; that country is Finland, and they have about a third of those deaths at 36. There is a direct correlation between the United States’ lax gun laws, high gun ownership rates, and very high gun-related deaths. Despite these numbers, Congress still is in a partisan stall and will not pass common sense gun laws.

Common sense gun laws include not allowing 18 year olds to buy assault weapons, or banning assault weapons all together. Currently, a United States citizen must be 21 years of age to buy a handgun, but only 18 to buy a long gun. This law is completely backwards and must be changed. Another fix that our legislators in Congress or in our home-state legislatures can make is strengthening the background check requirements to buy a gun. In its current form, the background check law allows for a citizen to buy a gun with a mandatory background check. If that background check takes more than three days, the citizen can lawfully become a gun owner. Another loophole that United States laws deals with gun shows. It is legal for anybody age eighteen or older to buy a gun from a gun show, background check free. By not allowing gun purchase at a gun show and strengthening background checks, through deeper diving into backgrounds and no three day loophole, America can slowly become a safer place without taking away its citizens’ civil liberties.

There is clear bipartisan support for laws to prevent mentally ill people from purchasing firearms, yet, once again, Congress has talked all about it, but still has passed no legislation concerning the issue. After the Parkland massacre, President Trump pledged to deal with the issues concerning mental health and improving school safety, but he said nothing of the sorts concerning guns until pushed on it by the Stoneman Douglas high school students. Let that sink in, high school students are tackling the issues more directly than our President. Despite saying this, President Trump’s most recent budget proposal asked Congress for major cuts to Medicaid; this program provides about one-quarter of all the behavioral care funding within the United States. Yet again, a politician has said one thing and done another. This repeated behavior of saying one thing and doing another in Washington has recently been seen in Congress; they promised the DREAMERs that they would pass a solution on DACA and have failed to do so as the March 5th deadline looms over them.

If America’s politicians are serious about preventing massacres and keeping their constituents safe, they must act on their word. Congress needs to pass the bills that it so often promises to the people, including gun legislation that limits the absolute ease that so many people experience when buying a firearm and that prevents the most dangerous of people from buying any type of gun. They need to keep military-grade weapons out of the hands of everyday citizens and listen to the country and law enforcement officials who know so much about the issue the country faces. As American citizens, it is our job to hold our representatives in Congress accountable. Call them, email them, or leave them a message. Tell your senator or representative that you expect to feel comfortable dropping your child off at school or going to a concert. Remind them of what promises they have made, and hold them to these promises. Make them put their words into action.

Besides contacting our representatives, we must also report the suspicious activities of others to law enforcement because as we know all too well, tragedy can strike anybody or any town in America. This proved to be successful in Everett, Washington, when a grandmother found her grandson’s journal where he wrote that he wished to be an infamous school shooter; this grandmother alerted the police and he was subsequently arrested, saving countless lives. By being proactive instead of reactive, America can make itself a safer place for all in the future.